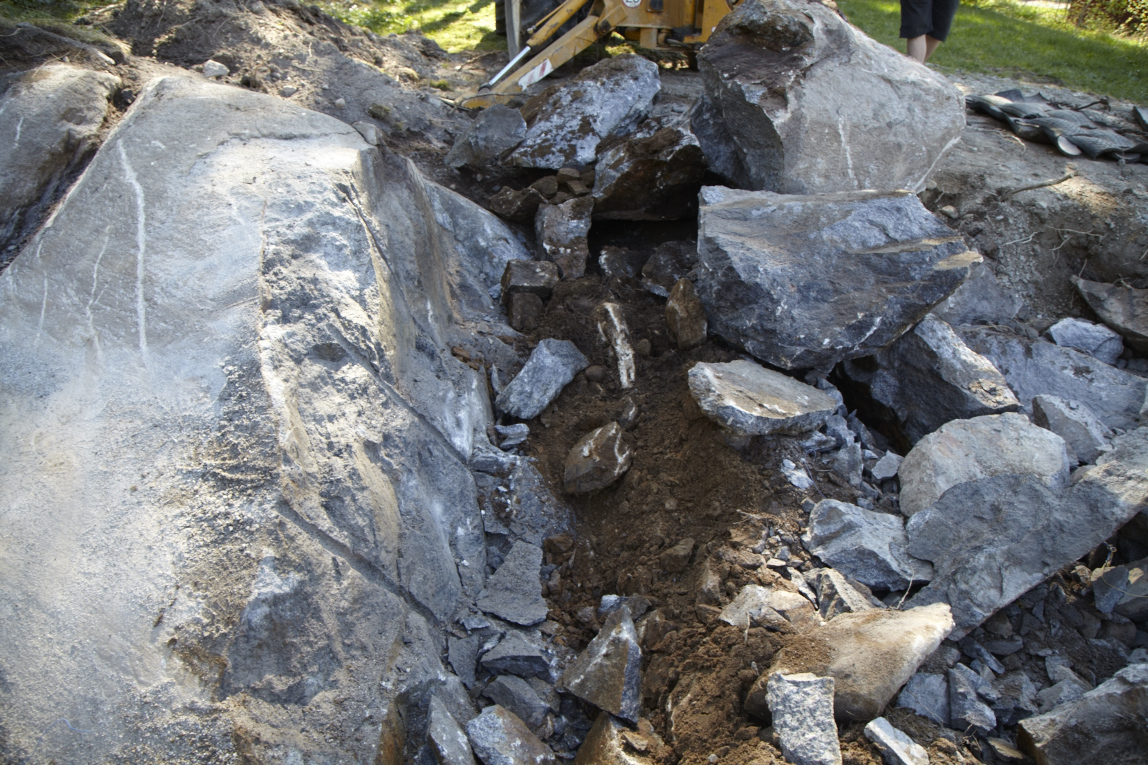 Trenches are generally built for pipelines of oil, water, sewage, and cables. The nature of these installations and services often entails working in densely populated areas. The use of low energy Royex propellant charges minimizes the risk of ground vibration, fly rock, dust and noise.

The video to the right illustrates the result of a large trench developed with Royex.  As can be seen the operation was done in a highly urban area just centimeters from a brick house.

Royex is ideal for blasting operations in urban areas in close proximity to houses, swimming pools, electrical installations, roads etc. The system allows for increased control of blast vibrations and fly rock. As the Royex system offers a wide array of diameters and charge weights, it is possible to choose just the right cartridge for any rock type and drill pattern.

Combined with blast mats, fly rock can in practice be completely eliminated which allows for continuous blasting and use in very tight spots in residential or commercial areas.

The first video to the right is a good example of the above where hard rock where removed on a drive way just meters from houses and roads.

The second video illustrates a shaft blast for a elevator shaft at a public school. Blasting was carried out during school hours without any risk to children or personnel.

As these videos illustrate, a great amount of rock may be removed with small Royex cartridges. In combination with blast mats, fly rock can in practice be completley eliminated allowing Royex use in dense urban environments and can also allow for blasting operations close to roads without the need for road closure.

For information on typical vibration leveles, visit our FAQ page.

As a quarry blasting technique the Royex rock breaking system can be used both as a primary and secondary blast or rock breaking alternative. Since the system is very precise and causes minimal rock vibrations and fly rocks , drilling and blasting operations can be done simultaneously. This also means that efficient quarrying is possible close to other structures and in cities.

The three  most frequent applications for Royex is pre-splits, secondary breaking and satellite charging.

A pre-split is basically a last row shot with tight hole spacing to create a split which will protect the remaining quarry wall from the fractures generated by the main blast. For this, Royex cartridges are placed in the holes and fired before the main shot which allows for a minimal back break and conservation of the hanging wall.

Secondary breaking is common in quarry applications as oversize is almost always generated when blasting. Rocks to big to handle or to fit in crushers may be broken very safely using Royex even if close to loaders and other pit equipment.

Satellite charging is a concept where a Royex cartridge is placed in the middle of a stemming column and fired with the main blast. This breaks up the crown rock minimizing the risk for oversize due to tall stemming columns.

The videos to the right shows a full quarry blast using Royex and also an example of secondary breaking close to a crusher.

Royex Break and pull for Quarries

For quarries with challenges in using conventional explosives, the
Royex break and pull concept could mean a drastic increase in productivity. By drilling aggressive patterns, and charging with a suitable Royex cartridge, in-situ rock can be split and moved into bigger pieces.  A video example of a Royex break and pull shot can be found here to the right.

The Break and Pull concept has been proven and is averaging an approximate 260% production increase with significant economical saving in contrast to breaking with mechanical tools.  For more information, go to our Break and pull concept page. 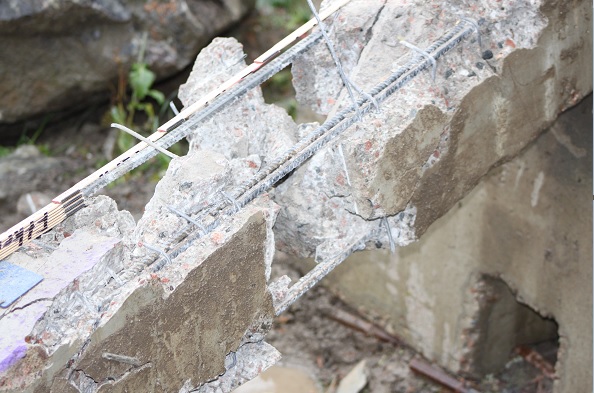 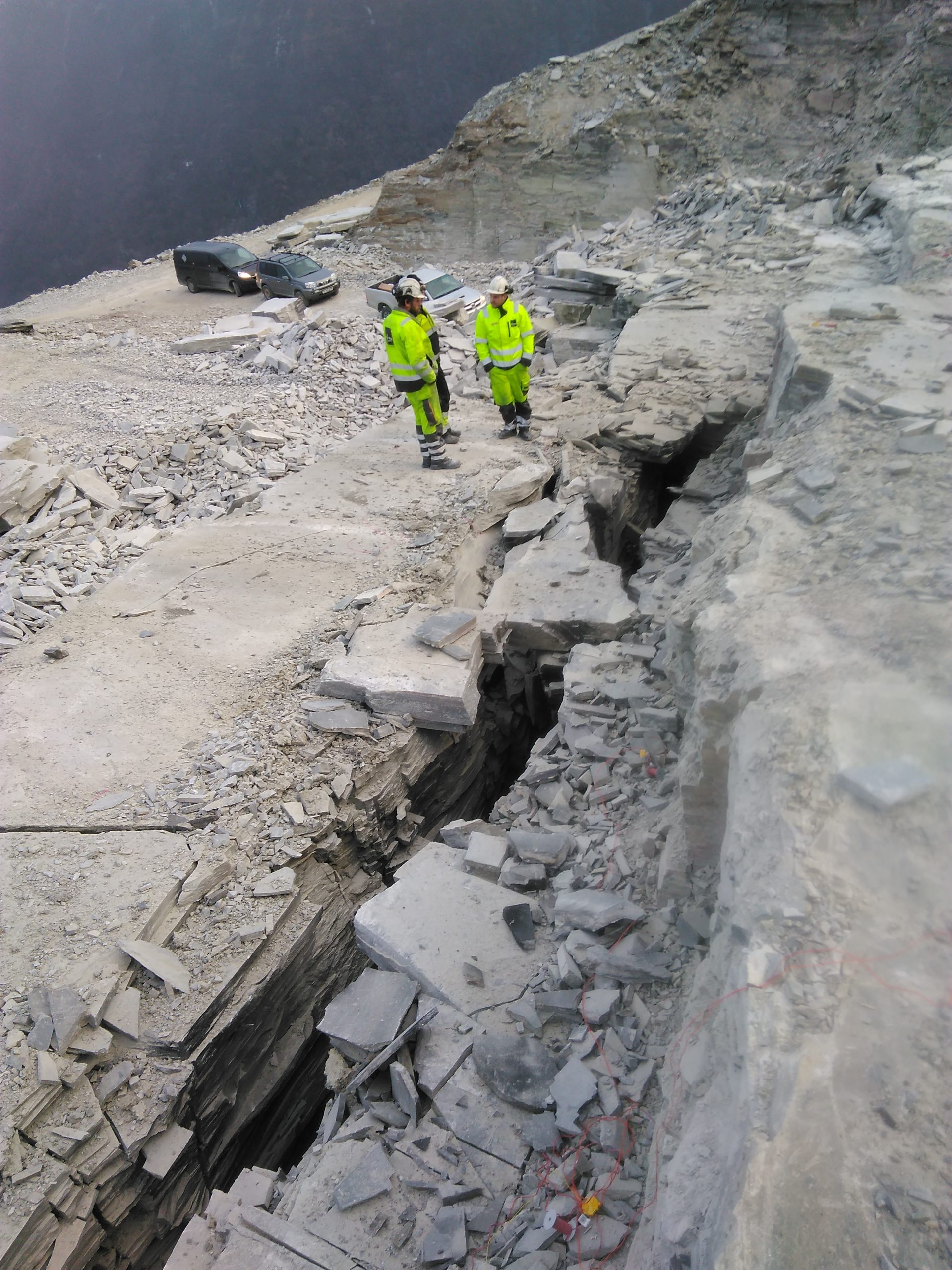 Block or dimensional stone blasting is a very specific type of blasting where big slabs of rock is extracted and then post processed to become construction material or ornamental pieces.

What is generally required in this type of blasting is removal of fractures or introducing weak panes into the resulting block. This means that the explosive used must be very forgiving to the rock yet powerful enough to break it out.

Royex does exactly this. As Royex does not produce a shock wave upon initiation, the Royex cartridge splits the rock without generating cracks. This means that Royex can increase productivity for dimensional block stone quarries.

Another advantage of using Royex is that the product is water proof. This means that it may be used when the face is ready for blasting regardless of water content in the holes. This is a great advantage compared to black powder or low density ANFO.

Royex is especially suitable for Slate, marble and limestone type rock. The video to the right illustrate operations in a slate quarry with highly segmented slate. The picture below illustrates the ideal wall integrity after a Royex shot. 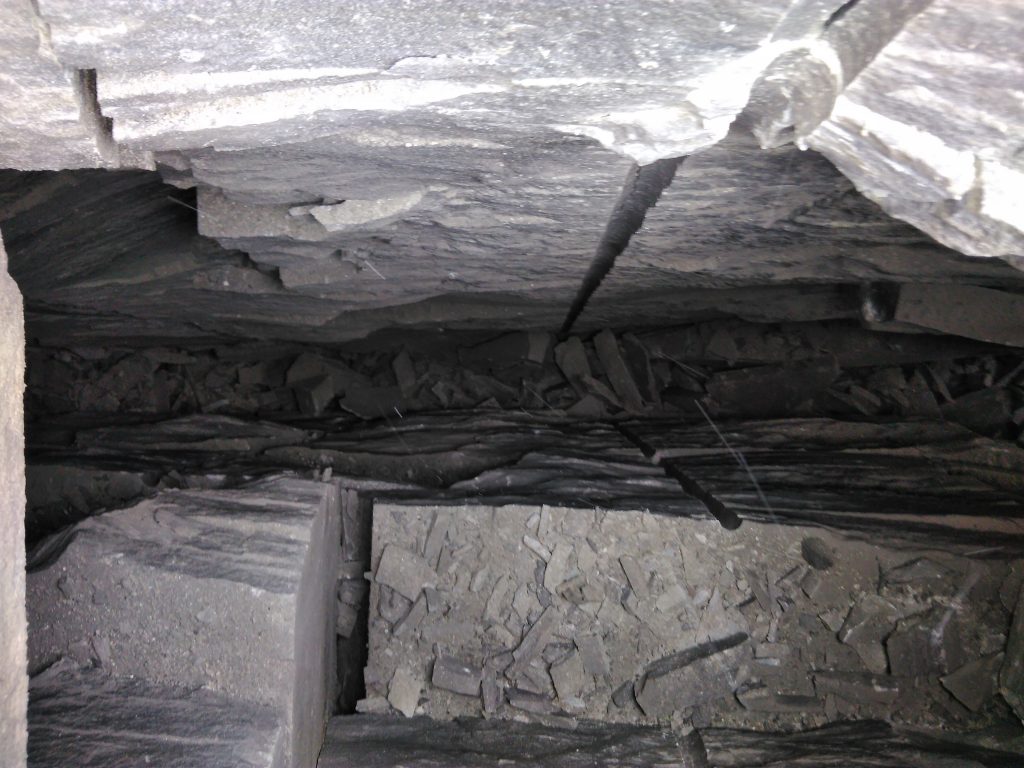 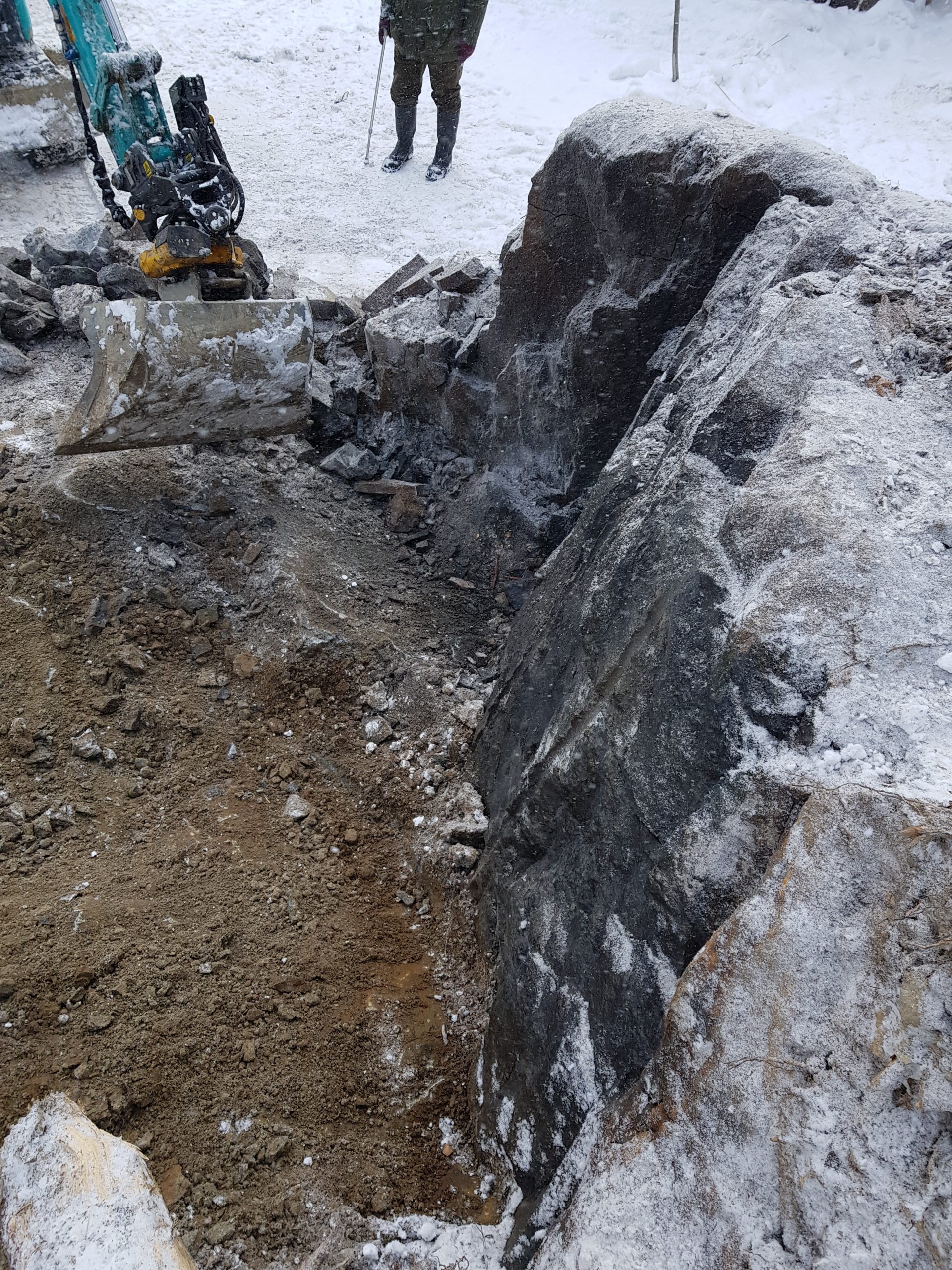 Due to the characteristics of Royex, significant output can be achieved in bench blasting per gram of Royex. This means that very low powder factors may be used without compromising breakage and fragmentation. Using lower powder factors combined with eliminating the shock wave makes Royex ideal for larger bench blasting projects in urban areas.

Royex cartridges are supplied in lengths up to 1100 mm which means that high bench shots can be achieved. Most common heights are 3-8 meters with burdens between 1,2-2,5 meters.

The video to the right illustrates a common Royex bench shot. Notice the excellent fragmentation and integrity of the back wall. 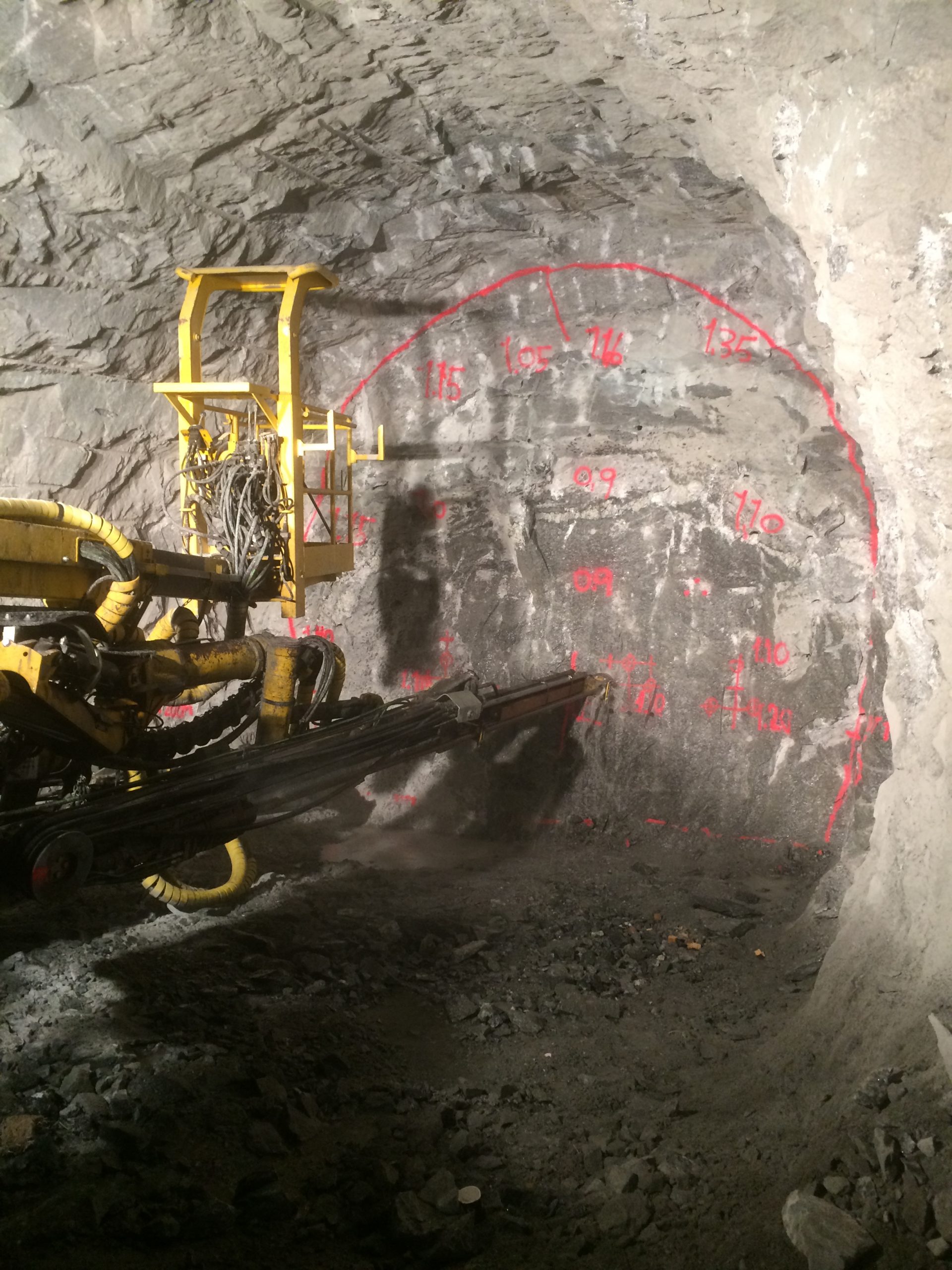 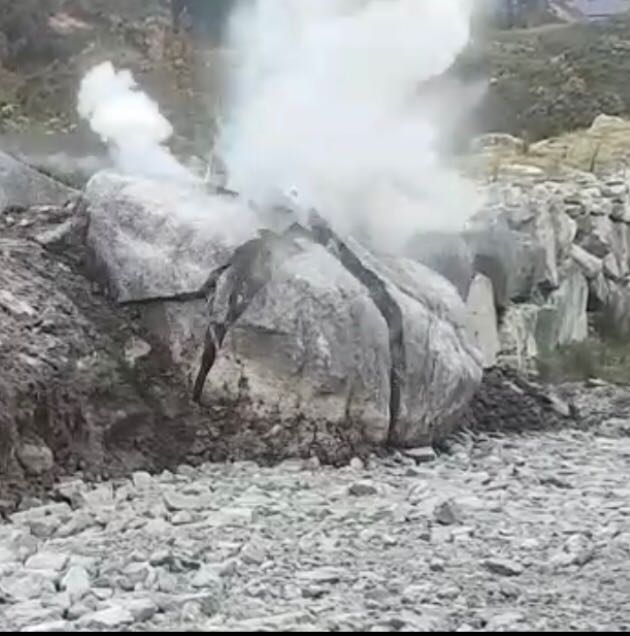 Royex is ideally suited to secondary blasting applications. Due to the low presence of fly rock, dust and noise, oversize boulders and rock can be broken whilst normal operations continue. In addition nearby equipment such as crushers, haulers and drilling equipment will not need to be moved from the operating site.

Using Royex to break such boulders are an ideal solution as the Royex system minimizes toxic gases such as NOx and CO. Royex is today frequently used in underground mining applications for just this purpose.  Basically, Royex breaks rocks that causes blockage or other problems in operations on shift without the extensive need for ventilation clearance.

In underground operations where slyping is normally required in the infrastructure maintenance work, Royex is an ideal solution as these tunnel expansion or similar blasting can happen with minimal risk.

Royex integrates smoothly into any centralized blasting system and can be use in any hole direction with our without water content.

The videos to the right shows some examples of overhang and secondary breaking in a quarry application. 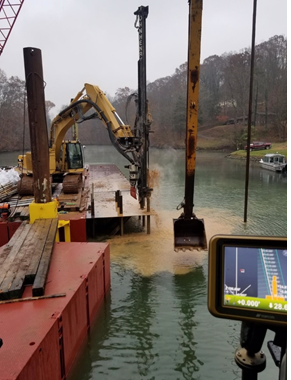 The Royex system is an revolutionary approach to under water rock breaking and blasting applications. The reason for this is that the Royex cartridge removes rock as effectively as conventional explosives, but, in contrast to detonating explosives Royex saves marine life.

Fish and water mammals such as dolphins and manatees are sensitive to pressure changes in water. They contain pockets of air which service them as buoyancy control organs. When using detonating explosives in water, massive pressure waves travels very long distances and the pressure differential crushes these air pockets, instantly killing the animal over large areas.

As the deflagration process eliminates the peak pressure behavior, the Royex system can effectively break rock underwater without destroying marine life (fish and other marine lifeforms).

The majority of our worlds population lives near water. Or, is dependent on a harbor or other water infrastructure. To ensure safe development of underwater structures without killing marine life, Royex would be the evident go to solution. Royex works down to depths up to 30 meters. 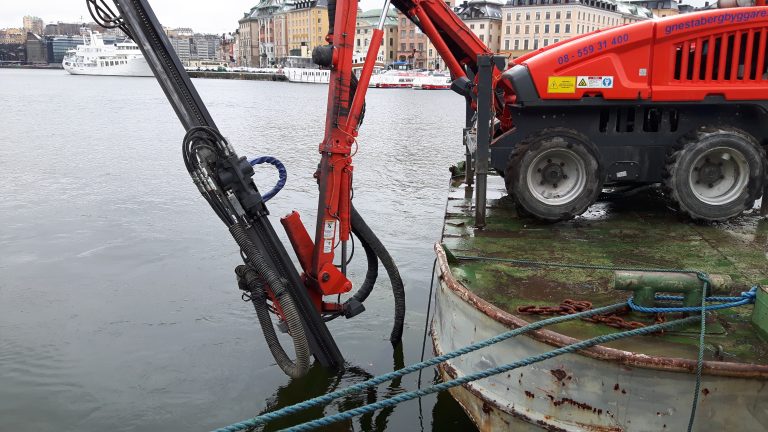